Denver’s newest events venue is the perfect combination of old, new, and you. Asterisk has transformed a 1920s post office garage into a spectacular modern venue at the intersection of some of Denver’s most dynamic downtown neighborhoods. The following spaces are available to host your memorable event experience: 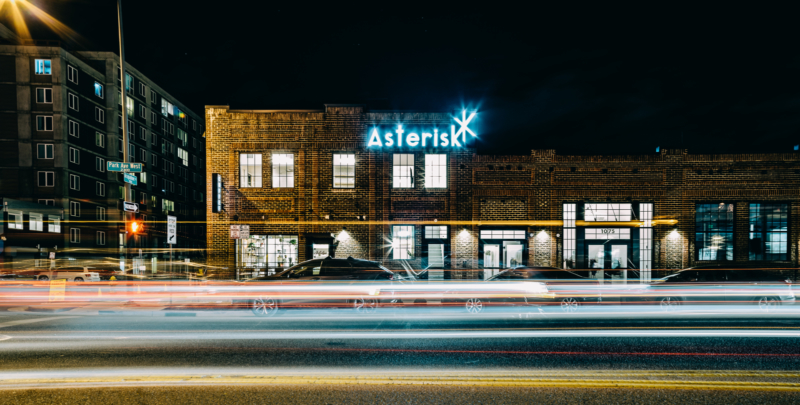 1075 Park Avenue West was originally built in 1923 as a U.S. Post Office garage. For the better part of the 1950s through 1980s, it functioned as a tire and auto shop before being converted into an automotive showroom for Weisco Motorcars (whose prominent signage remained on the façade many years after the fact). Most recently, the building was called Junction Box and was home to the contemporary ballet company Wonderbound.

Asterisk has both preserved the historic integrity of the original building and transformed it, ensuring this space can be enjoyed for the next hundred years!

Asterisk enjoys a premium downtown address at the corner of Park Avenue and Broadway, surrounded by some of Denver’s most vibrant and diverse culture. Situated at the confluence of the Curtis Park, River North, and Ballpark neighborhoods, Asterisk is just an easy stroll away from Union Station, Central Market, Coors Field, and multiple award-winning breweries, distilleries, restaurants, galleries, and boutique hotels. Just to our south is the Central Business District, with nearly limitless accommodations to suit everyone’s tastes.

River North & Ballpark: Our neighbors to the north and west were once hardscrabble industrial blocks of foundries and warehouses built along the Platte River and Union Pacific Railway. Abandoned for decades, they’re now widely recognized as Denver’s most eclectic, artistic, and vibrant neighborhoods. Ballpark is where you’ll find Coors Field, surrounded by dozens of popular restaurants and tap houses. The River North Arts District – or “RiNo” – is home to one of the largest concentrations of microbreweries in the country (not to mention all the distilleries, cideries, and urban wineries). Stroll around to take in some of the murals, art galleries and studios, boutique shops, and coffeehouses, and you’ll see why Travel + Leisure magazine recently called this area “the two-block stretch in Denver that you have to visit.”

Central Business District: To our immediate south lies Denver’s primary region for business and tourism, offering access to thousands of hotel rooms and some of the region’s finest entertainment.

A bird’s eye view of our venue reveals that we’re located on the asterisk-shaped intersection of Park Avenue, Broadway, and Arapahoe. Our logo is an image of that intersection.
The asterisk symbol is a writer’s mark used to annotate additional material. Its presence says, “There’s more here for you to explore, more for you to learn and discover, more for you to enjoy beyond your first impression.”
Most obviously, the asterisk is the convergence of three lines – symbolizing our purpose to bring people together for enjoyment, flourishing, and the common good.